In the first of my vegan New York blogs I’ll be reviewing By Chloe at South Street Seaport. I’ve been to By Chloe in Covent Garden, London before so I was really looking forward to visiting in New York. There are a few branches throughout New York which is convenient. This particular branch is near tourist attractions such as Wall Street and the Brooklyn Bridge. We got there just before 12 noon and we were very lucky as just after we had ordered it started to become rather busy (a running theme in all the places we ate in). We deliberated for a while over what to order because there was a good variety of things. I was torn between the Pesto Meatball Sandwich and the Burg BLT, deciding on the latter. My husband had the Guac burger without guac (big shoutout to him for going to all the vegan places on every holiday we go on even though he’s a picky eater, hence no guac)! We ordered at the counter and sat down in a window seat. We were tempted by the cool swinging seats but I thought it might get messy and there was no way am I getting food down me when I still had to walk around for the rest of the day. We also tried a seasonal lemonade. The one I tried in summer in London was delicious but this one had basil in and I didn’t like it but Billy loved it. When our food was ready they called over and we went to collect it. We both loved our food. I’m not usually a big fan of bread but this bread was so nice. It had a seeded crust and was toasted. It had lettuce, avocado, tomato, chipotle aioli and shiitake ‘bacon’. I actually hate mushrooms but this was the closest flavour I’ve ever had to bacon. It was amazing! We also had half and half fries. We loved the sweet potato fries in London, in fat they were our favourite ever but unfortunately they were a bit soggy this time. They were still nice but I was holding them to a higher standard because I had tried them before. 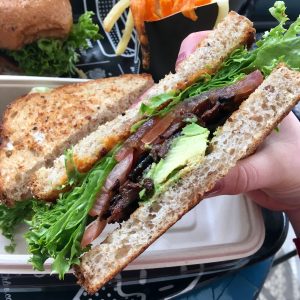 There were some really nice looking cupcakes and cookies but we were quite full and we knew we were going for dinner at the Cinnamon Snail later and so I wanted to save room for that.

I would definitely recommend By Chloe if you are in New York or near any of their branches. There’s a nice selection from pasta to sandwiches so there’s something for everyone. The people sitting next to us were saying they had never been before and they weren’t vegan but they enjoyed their food.