Foods You MUST Try in New York 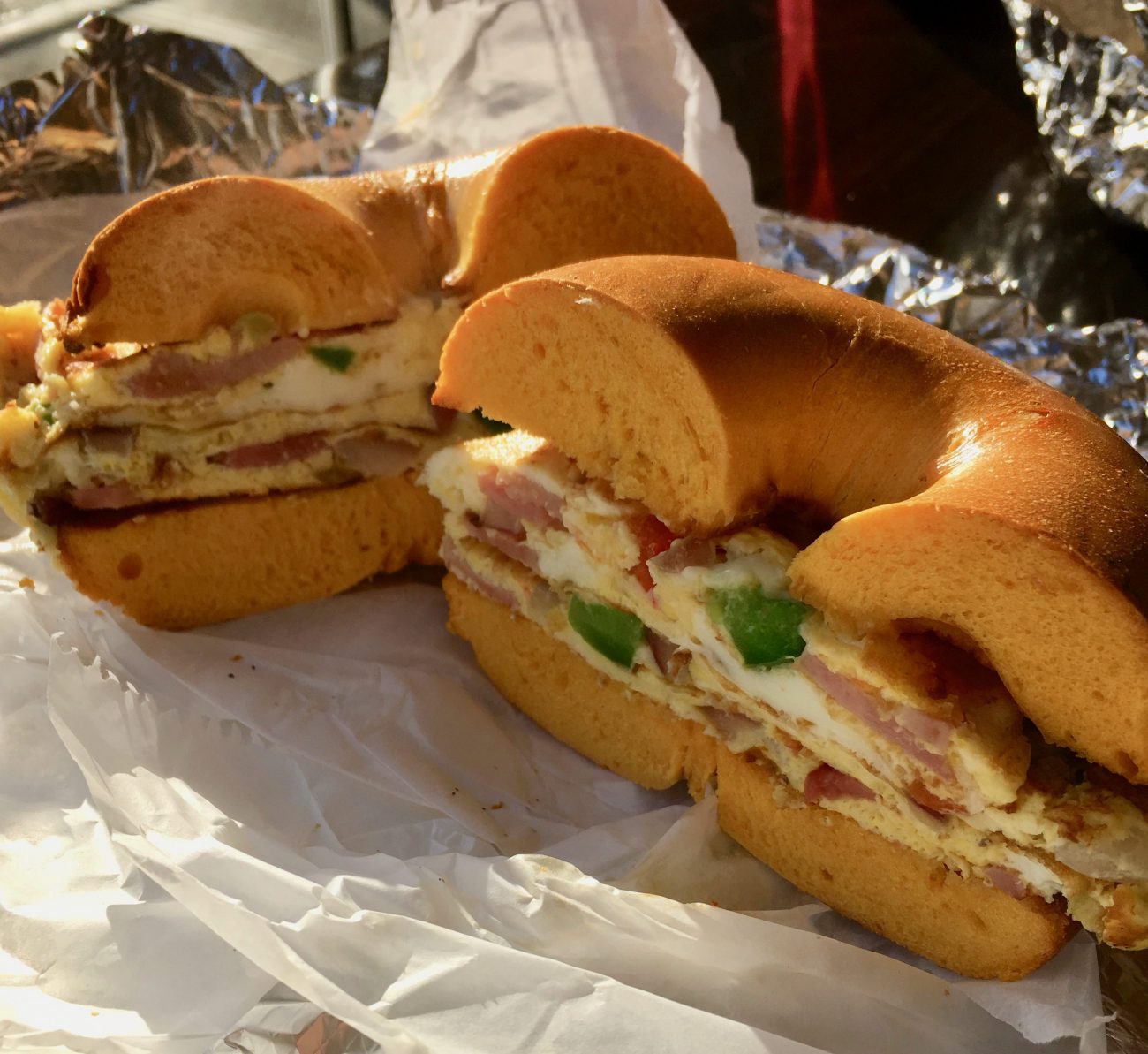 I’ve already done a post on places to eat in New York but there are some things that you have to try that you can get from lots of places. There are endless street food carts, chain shops and local markets that sell a whole range of foods that make you think of the Big Apple.

We raided a local market and CVS (which is a pharmacy but sells loads of different things) on our first night in NYC for snacks to take back to the hotel. The first thing we tried was Savoury Chex Mix which is a bit like the mini cheesey cracker mix you get at Christmas but with more cheese. The Popcorners popped corn chips were really good and came in a salted flavour. We both loved the Salted Caramel Pretzel Pieces which were very moreish and I haven’t even opened the peanut butter stuffed pretzels yet but anything peanut buttery is a must for me! We washed it all down with a peach and raspberry Snapple. 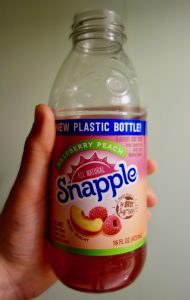 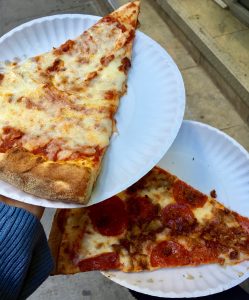 We had pizza twice on our trip. One time we grabbed a slice for lunch and the other we ordered a half and half pizza from a pizzeria down the street from our hotel. I can’t decide which was my favourite because I had plain cheese both times and they were both delicious. Maybe the first one was my favourite because I wasn’t expecting it to be so good. There’s pizza everywhere so you won’t find it hard to grab some. 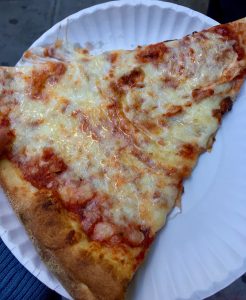 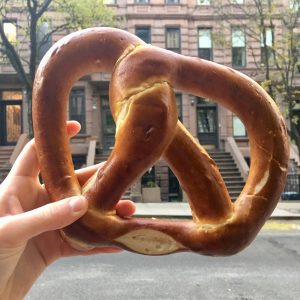 I love pretzels and they’re available from lots of places in New York, including the boat to the Statue of Liberty. I don’t really know what I can say about a pretzel because if you’ve had one you know how good they are and if you haven’t you need to try one. 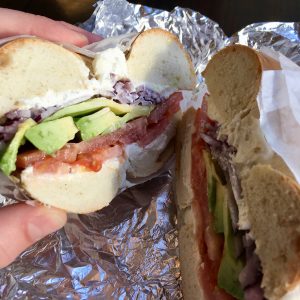 There loads of good bagel shops and if you’re in a rush you can grab one from a food cart. We went to Bagel Talk in the Upper West side near where we were staying. They had so many different types of bagels that I cracked under the pressure and ordered a plain one! Then you got to choose your filling and there was quite a lot of vegetarian choice. I went with avocado, red onion, cream cheese and tomato (I think this was the most fruit and veg I had in one meal the whole time we were there). Billy had an egg Bagel with a bacon omelette in. There’s even different cream cheeses to choose! 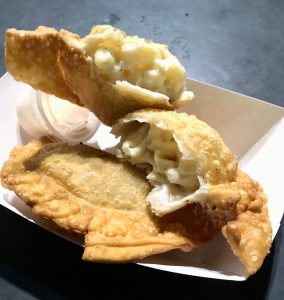 We were on our way to the Empire State Building when we stumbled upon the Bryant Park Winter Village. There were shops, ice skating and lots of food and as it was a warm evening we stopped for some dinner. Billy had Chicken in an ice cream cone which I had seen on Instagram before but still thought was a bit weird. I spotted some mac n cheese filled empanadas. I wasn’t sure if I’s like them because my mum makes the most amazing mac n cheese but puts tomato soup in it and so I don’t really like regular mac n cheese as much. However, we obviously just do it wrong in England because it was really tasty. I’d never tried an empanada before but it was a bit like a fried pasty.

I was a it wary of buying from street food carts because I wasn’t really sure how safe it was. Billy had a hot dog from one and it was about $3 which didn’t really make me feel any better about it. It was a pretty plain hot dog and we didn’t take a photo because being $3 it wasn’t very pretty.

I had a falafel sandwich on our last day. The falafel wasn’t as spiced as other falafel I’ve had but it was OK. I had lettuce, onion, tomato and cucumber in mine and white sauce (don’t even know what that is). It was wrapped in a sort of flatbread and got pretty messy. You could also get lamb or pork and you could get it in a salad too.

My favourite thing from a food cart was a little packet of nuts. I love honey nuts from our local farmers market and when they cook them in the street it smells so good. We’d not got to see the big Christmas tree lit up and it was our last evening so we drowned our sorrows in a packets of warm caramel nuts. 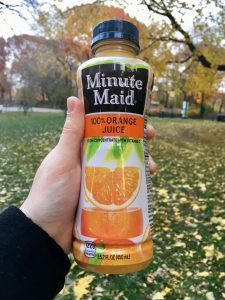 OK so the last thing on this list had to be a mention of Minute Maid. I loved orange Minute Maid when I went to Florida when I was 10 and then when I went to New York with sixth form I was delighted to find it in the drinks dispenser at breakfast. I just HAD to have some more on this trip. It’s honestly the best orange juice I’ve ever tried and I really struggle to get it in England. I’ve just ordered 6 litres from the internet. Oops.