The Home of Bakewell Tarts 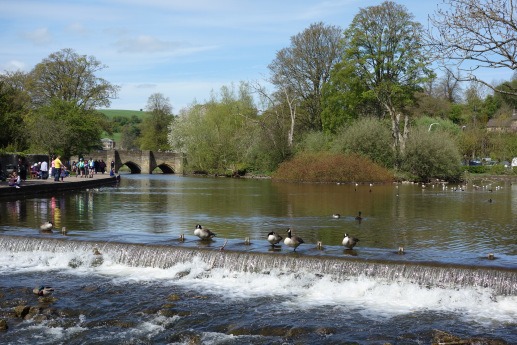 On bank holiday Monday we wanted to take advantage of an extra day off together but couldn’t decide where to go. After a lot of deliberation and still no ideas, we decided on going for a walk so we were at least out of the house and somehow ended up in Bakewell in Derbyshire.

It’s about an hour and a half drive away and is the other side of the Peak District. It was a very hilly yet beautiful journey in the sun. When we got there it was very busy as there was a Bank Holiday fairground and it was also the Bakewell food festival! 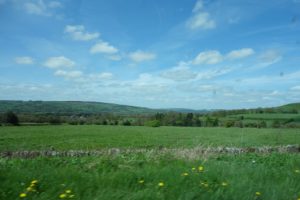 It was £5 to park for the day but a man who was just leaving gave us his ticket. It was 1.30 when we got there so we decided to sit on the grass by the river and have a picnic. We packed some crisps from home and on the way we popped into Sainsbury’s and bought mini sausage rolls, sausages, chicken bites and scotch eggs and a big platter of fruit with coconut, mango, kiwi, pineapple and watermelon. The fruit was surprisingly filling so we saved the rest for the car journey home. 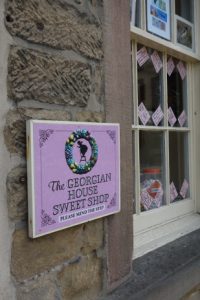 As we walked into the town we found the first of many sweet shops. One whole wall was filled with jars of sweets including different mints, fudge, toffee and bon bons. They also had factory seconds of things like M&S Walnut Whips. There were a couple of other sweet shops in the town. One of them had a whole American section in the middle with mostly Hershey’s products, but as I don’t buy Hershey’s this first sweet shop was my favourite. 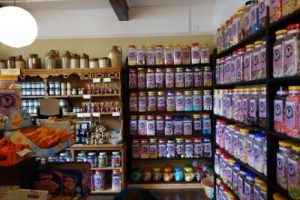 There was a great market there. It happens every Monday but was bigger that day because of the food festival. There were different olives and lots of nice cheeses, both of which I got a sample of, more factory seconds in the form of biscuits and small cakes that weren’t up to supermarket standards, pies and of course a range of Bakewell tarts and puddings. 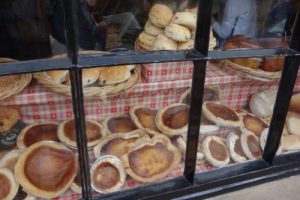 The origin of the Bakewell pudding is unclear. One story is that the landlady of a local pub left instructions for the cook to make a jam tart. Instead of mixing the egg and almond mixture into the pastry, the cook spread it on top of the jam and when cooked it set like a custard. The pudding was popular so stayed on the menu.

According to BakewellOnline the Bakewell tart is a particular version of a Bakewell pudding. If you don’t know what a Bakewell tart is you need to go and find one. Quite frankly they are one of the best things to grace the earth alongside chocolate and tea. They are essentially almond frangipane and jam in a pastry case. The most popular version is probably a Cherry Bakewell with icing and a cherry on top. 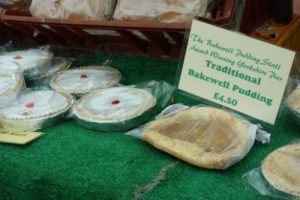 We went to one of the three shops that claim to be ‘the original’ shop. There was a lot of choice including traditional Bakewell puddings, slices of a large Cherry Bakewell and even a coconut and jam version. I eventually settled on a ‘Traditional Bakewell Slice’. Don’t worry if you’re not a fan. They also sold other treats such as the ‘Naughty but Nice’ chocolate slice which Billy went for. 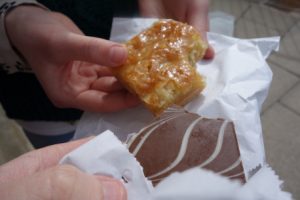 The town has something for everyone. There’s a hiking/cycling/horse riding trail nearby, pubs, parks and a whole range of shops. I like Jenny Colgan books like ‘Rosie Hopkins Sweetshop of Dreams’ and ‘Welcome to the Cupcake Cafe’. While looking round the little bookshops in town I found one by her which completed my day. I’ll have to do a book review one day!

If you would like to make your own, you can find my Individual Bakewell tart recipe here.

[…] almonds and honey almonds (honey cashews are great too). I love it all. I mean what could beat a Bakewell tart or […]