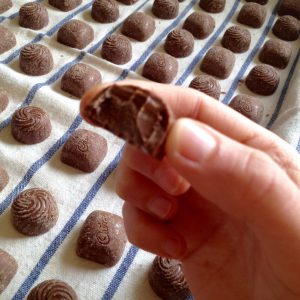 A few months ago on what (luckily) turned out to be the first sunny day of the year we went on a chocolate tour. There are lots of companies that run chocolate tours in London. The company we went with, Great British Tours, often has cheaper last minute tickets for some of their tours, including a cupcake tour, on YPlan (get the app). On the walking tour you discover the best chocolates in London and get to taste a few too!

We met up with the rest of the ‘tourists’ outside The Algerian Coffee Store. In the window display there was enough types of coffee bean to baffle a non coffee drinker. Unfortunately for the coffee drinkers amongst us hoping to get their morning fill, the store was closed with it being a Sunday morning.

You may be wondering (as were we) what we were doing starting a chocolate tour at a coffee shop. Well, our tour guide was very prepared and had a supply of their chocolate covered coffee beans to share out. I was reluctant to try them but I wasn’t about to turn down the first chocolate sample of the day. I’m so glad I didn’t!

They had white, milk and dark chocolate and since we arrived early and were put in the second tour group which left slightly later, we had plenty of time for seconds (and thirds). 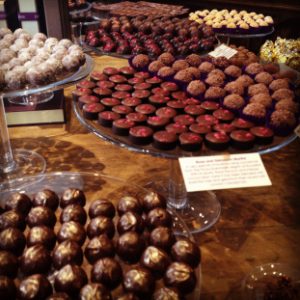 Once everyone had arrived we started to make our way to Paul A Youngs in Soho. This first shop was opened in 2006 and is now one of four shops in London. Here we learnt a little bit about the history of chocolate, which started out as a bitter drink made from cocoa beans by the Aztecs called xocolatl. We also got an insight into how Paul makes the delicate chocolates and truffles right there in the shop. Before leaving we tried one of their sea salted caramel truffles and browse the store with a 10% discount.

Our next stop was Hotel Chocolat, one of the most well known chocolate specialists on the tour. As well as the dainty chocolate boxes and chocolate slabs on offer there was also a selection of alcoholic cocoa such and gin and beer, and their cocoa beauty products. Cocoa contains antioxidants, vitamins and minerals so really lends itself to beauty products like moisturiser and lip balm.

To be honest all I remember about the chocolate we tried here was that it was a white chocolate truffle filled with something fruity, possibly peach. I think I was still a bit caffeine fuelled after the chocolate coffee bean binge earlier and busy dreaming about their hotel, spa & restaurant set among cocoa groves on the island of Saint Lucia. 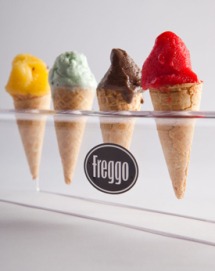 Freggo was one of the few shops that we went to that weren’t actually chocolate specialists. Freggo sell ice creams and they come in pretty much every flavour imaginable. You could go back as many times as you wanted to try a small spoon of different flavours. We went for a strawberry and a lemon to make a change from all the chocolate we had eaten already that morning. Then we tried their famous dulce de leche flavour. 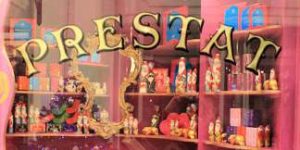 The next shop was Prestat which has a colourful pink and blue interior. It claims Roald Dahl, the author of Charlie and the Chocolate factory, is it’s most famous customer and in 1975 was granted a royal warrant as Purveyors of Chocolates to her Majesty the Queen. You can find out more of the history of Prestat here.

It’s a small shop for a tour to fit into so we tried a champagne truffle and headed towards Piccadilly.

The second to last stop on the tour was Fortnum and Mason. It started in 1705 and is considered the first supermarket in the UK. It sells everything you could possibly need for the best tea party ever, from the tea itself to the delicate tea sets you would expect to find at Buckingham palace (because pretty much no one else can afford them). They have an amazing confectionary department with chocolate, handmade sweets and candied fruits like whole melons and even candied celery. 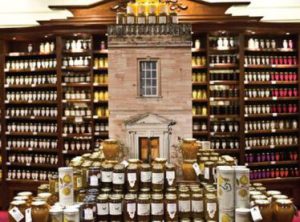 There is also a whole section of preserves, selling honey, jellies, jams and marmalades, and a very posh grocery store.

We had a chai tea chocolate in the shape of a teacup. You couldn’t eat many of these. Not only does a small box of chocolates here costs £20, but they had a strange flavour that you couldn’t eat in large amounts.

The combination of the tons of chocolate in our bellies, realising that we will probably never be rich enough to buy our groceries in such a beautiful shop as the one we just visited and the fact that we were heading to our last stop on the tour could have made us quite gloomy, but our tour guide was always engaging and upbeat even though she had probably done the same tour 100 times already.

We ended our tour at The East India Company. This company was granted a royal charter in 1600 and was founded to explore the mysteries of the East. The company had a big role in the rise of the British Empire and controlled large parts of India with it’s armies. It was dissolved in 1857 when some of the soldiers rose in revolt against Britain.

In 2005 the name was aquired by an Indian Business man Sanjiv Mehta, and is now a luxury food brand.

The shop always has free samples so we were not only treated to chocolate but to crackers and chutneys, biscuits and tea.

We had such a great few hours on the chocolate tour. We thanked the tour guide and left with very full tummies and having a ‘slight’ sugar crash. I would definitely recommend going on a chocolate tour. We loved it so much I’d really like to go on the cupcake tour that they do.

[…] our chocolate tour last Valentines Day, this year we decided to stick with the chocolate theme and go to Cadbury […]