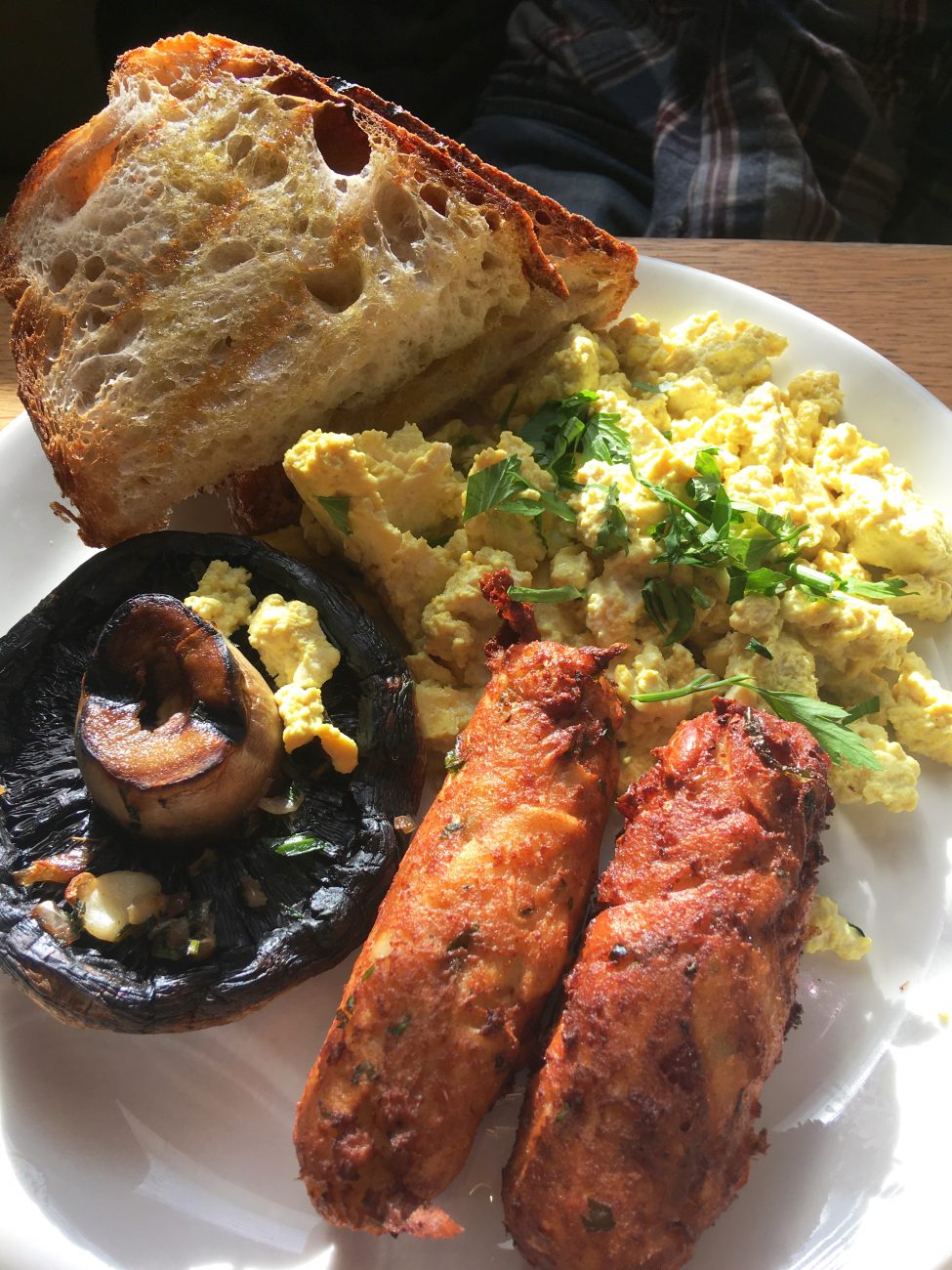 On our recent weekend in London we tried out a couple of vegan restaurants that we hadn’t been to before. First we went to Neat Burger for dinner on the Saturday night. As the clocks went back at 2am on Sunday morning and we had a busy Sunday ahead of us we wanted a nice big breakfast or brunch to set us up for the day. We were staying in Kings Cross so after a google I quickly discovered Mildreds around the corner from our hotel. They opened for brunch at 10am and I was starving mainly due to the fact that the clocks going back had added an extra hour in between dinner the night before and breakfast but also because I’d eaten all my snacks on the delayed train on Saturday so hadn’t snacked in a while either. We got there just before it opened so we waited outside for a few minutes but there was already a small queue forming. We were welcomed in and sat down by the window to look at the menu. As usual I already knew what I wanted before I sat down. I wanted the waffles which are fully vegan with strawberries, chocolate sauce and ice cream. Billy had the vegan Big Brunch (everything on the menu is vegan unless they are labelled vegetarian or vegan option). The only difference between the vegetarian and vegan big brunch is you get scrambled tofu instead of eggs which Billy loved. 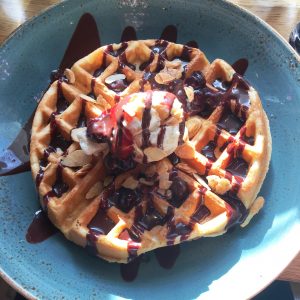 My waffles were delicious and had so many textures, from the fluffy waffles to the crunchy almonds. It was so filling that even I couldn’t finish the last few mouthfuls! The vegan big brunch was also delicious apparently, I tried a bit and we both said it felt like we were actually eating something healthy and nutritious. I had a pot of English Breakfast tea with oat milk which was perfect for washing down the waffle with and Billy had an oat milk hot chocolate. I’d seen reviews saying it was expensive but for the pot of tea (which was more than enough), hot chocolate and the two breakfasts and an optional service charge it came to £28.13. This was our main meal for the day and got us through a day at the Shard and a concert before needing a sandwich and a snack for the train journey home in the evening. I’d say it was definitely worth the money for the flavour and for keeping us full throughout the day. My last mention goes to the staff at Mildreds. They were so friendly and helpful and we had a chat about the rest of our day.

I will definitely head back to Mildreds when I’m in London again and with locations in Dalton, Soho, Kings Cross and Camden it won’t be hard to find one close to where we are. I’d love to try out their main menu later in the day next time!