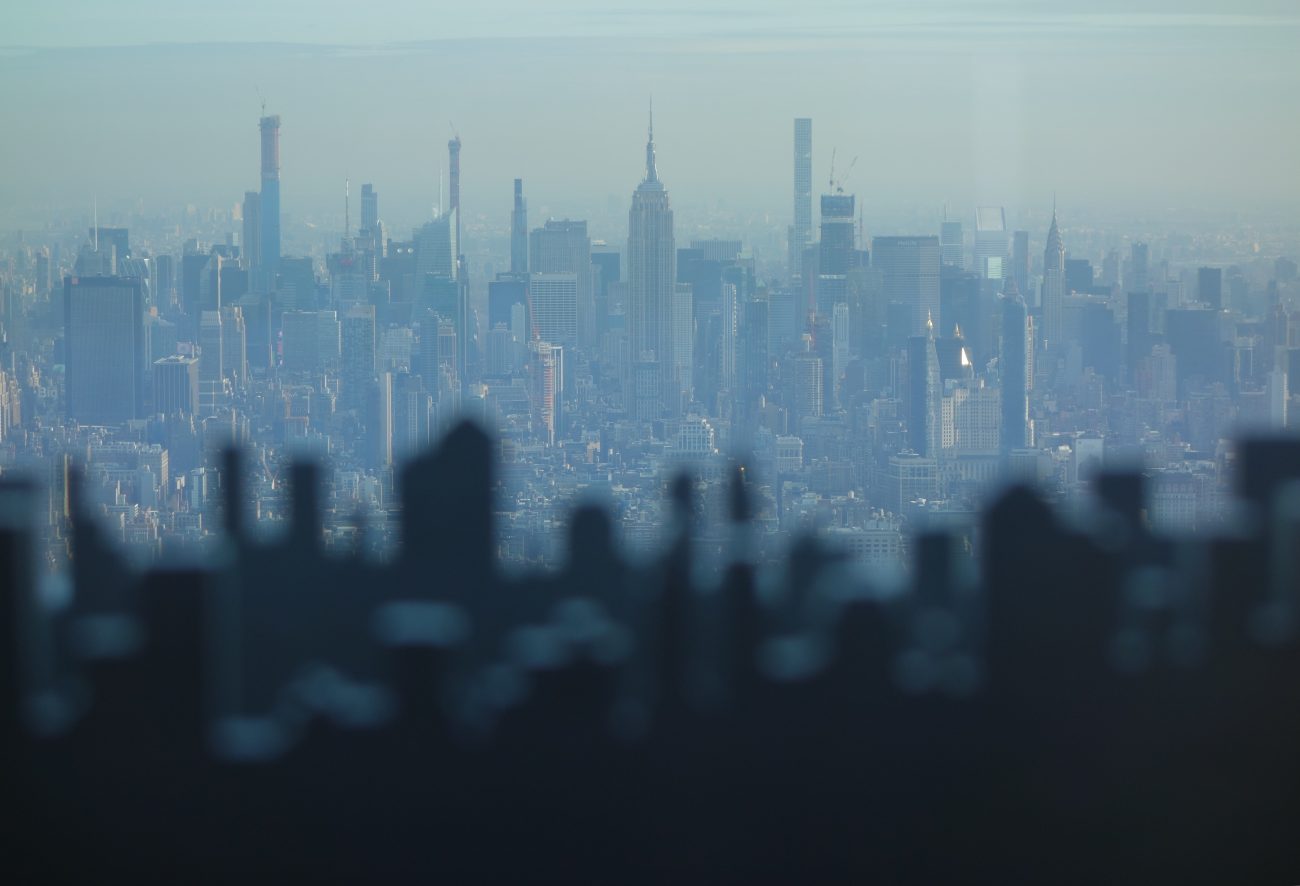 So by now you’ve probably seen that I’ve done a lot of posts about vegan New York food and gathered that I went there. In this post I’ll run down where we went, which tourist attraction are there and where is close to eat vegan food. 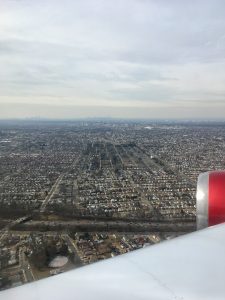 We flew from Manchester airport to JFK with Virgin Atlantic. They have pretty good vegan and vegetarian options so you’re unlikely to go hungry. They also have really good entertainment – I watched Mary Queen of Scots, Bohemian Rhapsody, Crazy Rich Asians and the new Disney’s Freaky Friday on the two plane journeys. We got the AirTrain and subway into Manhattan which was much easier than last time as we knew what we were doing!

We checked into the Pod Hotel 42nd street which was in a really convenient location a short walk from the subway and Times Square. It was pretty small but it’s called Pod for a reason and was all we needed. Once we had unpacked we went for a walk to Times Square and then got snacks from Duane Reade and watched Riverdale (I fell asleep a few minutes in). We went to the 9/11 memorial and the One World Observatory on the first morning. We hadn’t been to this observatory before and I’m pleased we went because it has beautiful views. We got there for 9am when it opened and after about an hour shortly before we left it started getting really busy. I had watched a lot of videos about New York before we went and I’m a big fan of Hamilton the musical and the history so we went to see some historical places. First we saw Hamilton’s grave in Trinity Church, then we walked to The Fraunces Tavern where in 1783 George Washington’s said goodbye to his officers due to his retirement. Next we went to Wall Street and the Federal building where he was sworn in as the first President. 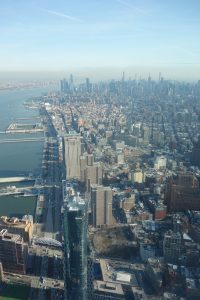 We went for lunch at By Chloe’s South street seaport branch and then walked to the Bro9lyn Bridge, via City Hall. We stayed a while in Brooklyn which was beautiful and quite different from Manhattan. I’d love to spend a whole day exploring there (plus they have Screamers vegan pizza). We got the subway back to our hotel to get changed before going to The Cinnamon Snail for dinner. We went to see Mean Girls the Musical that evening. It was the best musical we saw and is now my favourite musical on Broadway (second favourite ever after Heathers). I love the soundtrack and listen to it all the time but it was even better in person. It was great to see a show that was lead by a group of strong, talented, funny women! I know some people might not want to see it thinking it’s a chick flick but it’s so clever and you definitely don’t want to miss out! We went for breakfast at Terri to set us up for a day of walking. Last time we didn’t see the Flat Iron building or Grand Central so they were on our list of places to visit that day. I went into Bath and Body works because I wanted to get another room spray. I got one in San Francisco and it reminds me of our holiday so much so I think it’s a nice reminder of New York. That afternoon we got the aerial tram to Roosevelt Island. It only costs a metro card swipe which is $2.75 and is an experience in itself. You get to see a lot of Manhattan from above and it takes you to Roosevelt island which is in the East River. It’s a nice walk although it was 22 degrees Celsius that day and I’d packed for winter so it was a little warm. We got married at a lighthouse and it was our anniversary a couple of days before so obviously we visited the lighthouse at the Northern end of the island. You can get the Subway off the island so we took it to Hudson Yards which was opening that day. I’d heard that there was a Van Leeuwen ice cream shop there. 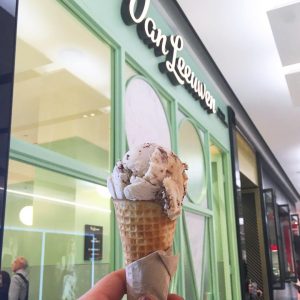 After getting changed at the hotel we ate at Blossom du Jour which was just around the corner. The show we saw that night was Be More Chill. People go absolutely crazy for it and so I was excited to see it. I have to say that it didn’t live up to the hype for me. There is a song called The Pitiful Children bear the end and I wish it had all been at that level throughout. I just wanted more. It was still a great show but I think I’d have enjoyed it more if I hadn’t held it to such high expectations. In the morning we went to the North of Central Park and planned on walked the top half of it as last time we only did the bottom. On the way we were going to go to Two Boots pizza where there are some vegan options but we got all the way there and it was closed. Like really closed and under possession of the landlord. I was a little bit hangry at this point so I had some snacks and a vegan pretzel while we walked past the Delacorte Theater, the Alice in Wonderland statue and Bethesda Fountain. It was the St. Patrick’s day parade (which is held on Saturday if the actual day falls on a Sunday) so we exited the park on the East side and watched the bands and people parade up 5th ave. The parade starts at 11am and finishes at around 5pm so we just watched for about an hour. It was only 1.15pm when we left so we decided to see if we could get to the Times Square TKTS booth in time to get last minute tickets o a show. 20 minutes before it closed for matinee performances we got there very out of breath and managed to get tickets to King Kong the musical. Next we had to run to get to the theatre on time! We made it! The seats were quite close to the front, I think on about row G. Unfortunately the people sitting next to me kept talking and taking photos which was rather distracting, especially since you’re allowed to take photos in the curtain call anyway. The set was amazing and there was a lot of video projection so when King Kong is running it really looks like it’s running rather than just staying in one spot. King Kong itself was so clever. There were people backstage controlling some of it and then there were people on stage using ropes to move it too. The lighting and sound added so much to the atmosphere and so overall I’d say it was a spectacular but it could have been a play. I don’t remember any of the songs and I don’t think it needed any. It was enough without them. It had the kind of energy I wanted to see from Be More Chill. I went to get food from Taco Bell Cantina on 8th ave on the way back to the hotel and Billy got a pizza since we didn’t get one earlier. We had tickets to go to the Top of the Rock that evening so we wrapped up and headed to the Rockefeller Center. It was really busy where you wait for your ticket time to be called but once we got to the top it wasn’t too bad. The reason we chose the Top of the Rock was because I’ve only ever been there in the day and the Empire State Building at night. The Empire State at night it my favourite place in the whole world so I wanted to compare the two and of course you get to see the Empire State from the Top of the Rock. 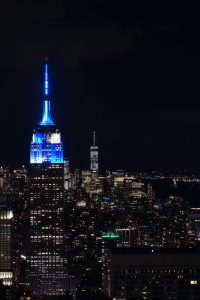 The Empire State is still my favourite. I think it’s because it’s much taller than the buildings around it. I love being up there and seeing the lights and thinking about all the people in the city, where they’re from and what they’re doing there.

Our last day in NYC. Two of Billy’s friends work on a cruise ship and were in New York for a few hours so we went to Times Square to meet with them, stopping at Schmakary’s on the way for cookie supplies. It was the New York half marathon so we watched the runners for a while and eventually found somewhere to cross the road to the other side of the runners. After brunch at UrbanSpace at Vanderbilt we headed to the Rockefeller Center again and watched the ice skaters for a while before going to take a look at the ship before they had to board again. We actually headed back to the Rockefeller Center as we knew there were some nice shops there to get some gifts from. We eventually had to go to the hotel and pick up our luggage and go to the airport. I cried on the plane when we had to come home because I was leaving my favourite place. So if everyone wants to order loads of cake from me so I can go back and buy a house there then it would be much appreciated haha!