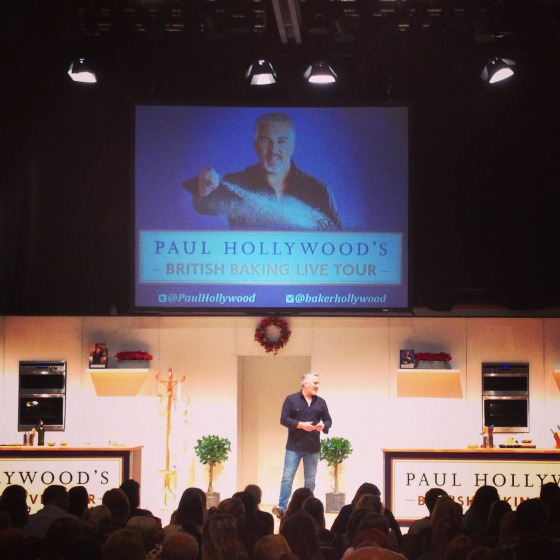 I went to see ‘Paul Hollywood – British Baking Live’ at Warwick arts centre at the weekend. Coventry was the third to last date on the tours I jumped at the opportunity to go!

There was a real mix of people there although it was a predominantly female audience which the person introducing the show joked about. We were lucky that our seats were right in the middle. However, later I realised this meant I wouldn’t get to try anything unless I climbed over the rest of our row (I managed to restrain myself). There probably wasn’t a bad seat as the baking was displayed close up on the big screen.

In each act Paul baked two items in-between telling us about ‘The Great British Bake Off’, his love of motorcycles and cars and his mother/son type relationship with Mary Berry, who at the Good Food Show last year signed his expensive car with a sharpie and subsequently spent an hour trying to scrub it off with a wet wipe. Unsuccessfully.

The first thing he made was a baked brie wrapped with parma ham and cranberry sauce. I’ve never tried brie before but I definitely wanted to when the smell wafted over from the oven. Just FYI, you can find all of the recipes in his book of the same name or, if you can get your hands on one, in the programme for the tour.

He also made a traditional chocolate yule log. It was iced with chocolate buttercream with the help of an audience member who quite frankly looked terrified at the prospect of piping for the first time under the strict eye of Paul Hollywood. Who can blame her!

After the interval Paul answered some questions that had been sent in on Twitter. Questions ranged from tips for baking sourdough to his favourite meals to cook and eat. In act two we carried on with the festive theme. We learnt a new twist on mince pies with a pastry resembling shortbread and a filling with whole satsuma or mandarin segments and chopped apple.

The last thing Paul baked was a Stilton, Pear and Walnut bread. He described it as a ‘poor cousin’ of his Roquefort and almond sourdough which sold for £15 a loaf at Harrods making it the most expensive bread in Britain. It used the highest quality ingredients and was only available for a limited time last Christmas.

As the show came to an end, four audience members were picked to compete in a ‘Bake Off’ style competition. Each were given a bowl of dough and were shown how to make a ‘simple’ plait. He did joke that they were going to be making the infamous eight strand plaited loaf which even baffled the Bake Off bakers in the series 3 technical challenge.

I had a great afternoon! The show was really varied, from the recipes to the mix of baking and talking and audience interaction. All I hope now is that they do a Bake Off Masterclass tour with Mary Berry too! In the meantime, I’d definitely see a live Paul Hollywood show again.