Places to Eat in NYC 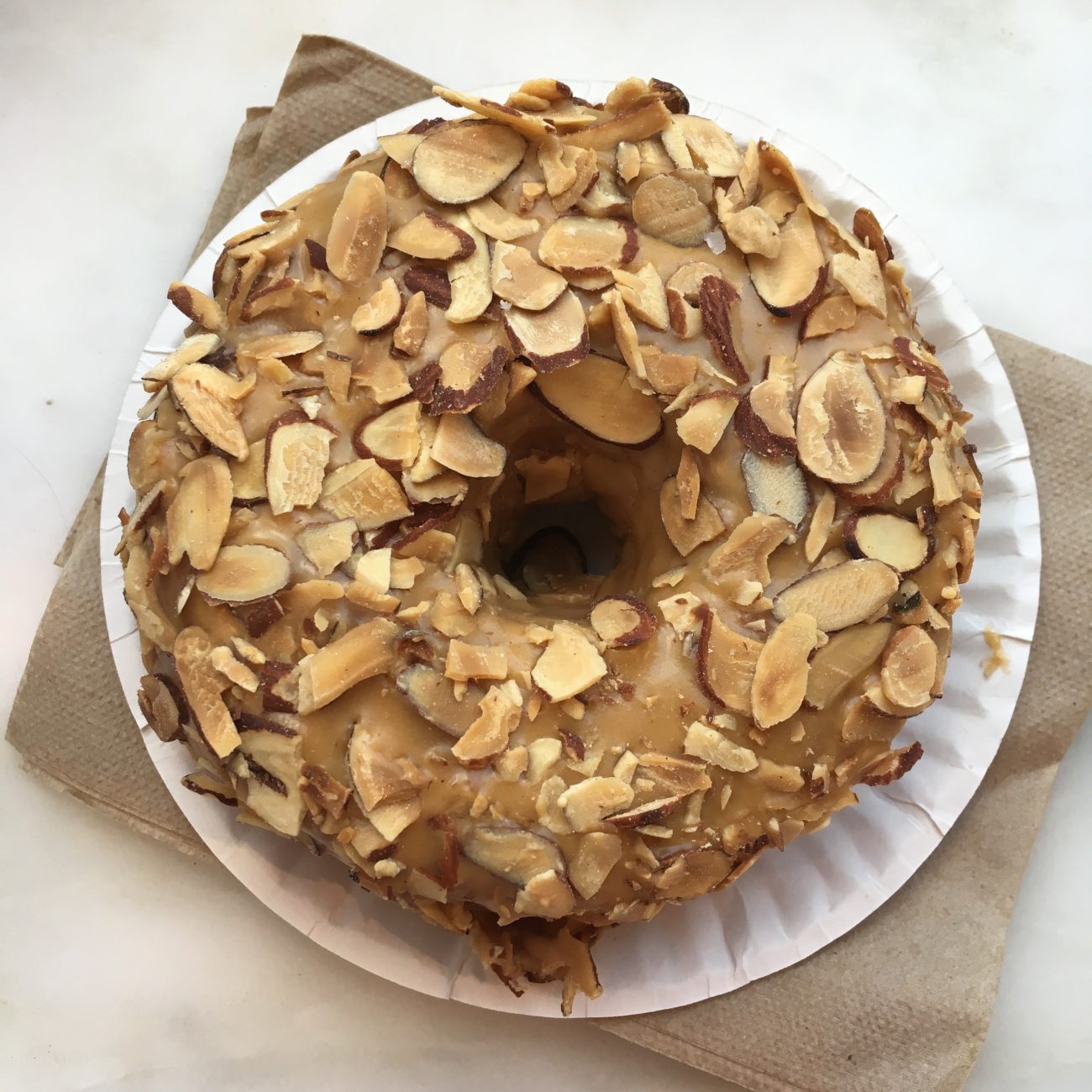 As you probably know by now, I’ve recently returned from a few days in NYC. This is second in a series of posts about New York (you can read the first here). I’ve had so many places to eat recommended to me or found on the internet via other peoples blogs and vlogs so it turned out to be quite a foodie trip. Here is my very own list of places to eat in NYC. 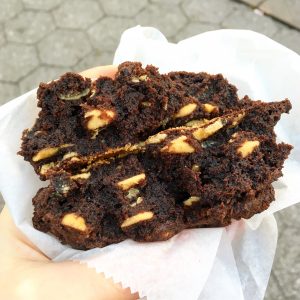 I’d been following Levain on Instagram for ages because their cookies look amazing. It turned out that we were staying around the corner from their shop on West 74th Street and it was the first place we went to! We were one of the first people in there that morning because of jet lag. In fact, we’d been wandering round waiting for them to open. 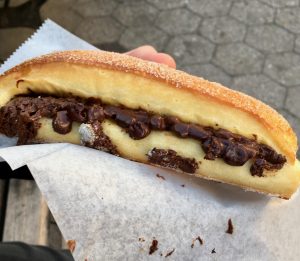 I had to get the dark chocolate peanut butter chip cookie and Billy had a chocolate chip brioche although I could have honestly had one of each of everything. My cookie was so rich and filling and it was still a bit warm from the oven! 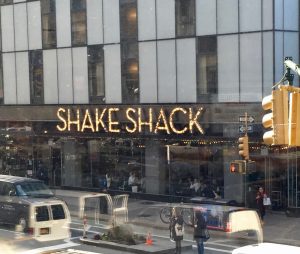 Loads of people have said that if you go to New York you need to go to Shake Shack (I know there are a few in the UK but there’s much more in NY).

We went to the one in the Theater District on our first full day before seeing a show and it was fairly busy but not packed. We ordered our food, got seats by the window and waited for the device they give you to buzz so we could collect our food. 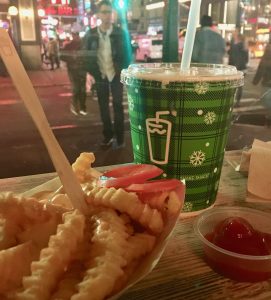 I’ll be honest, there wasn’t really much choice as a vegetarian. They do a mushroom burger but I hate mushrooms and that’s about it. I settled on some cheese fries and a strawberry milkshake which filled me up enough. The crinkle cut fries were really tasty and it was fun to try cheese fries but the cheese didn’t add much flavour. The milkshake was delicious. It was really thick and tasted more like frozen yoghurt than milk. It was a great place for Billy to eat because you can get a plain hamburger and add tomato, lettuce, pickle or onion. 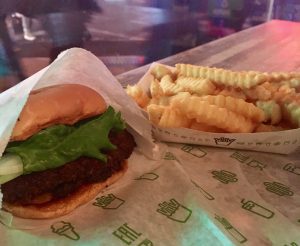 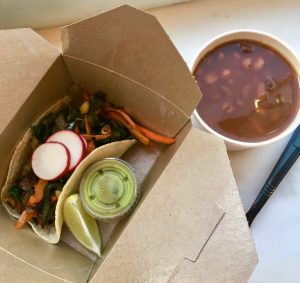 City Kitchen is a sort of upmarket food court. It brings together New York’s most sought after foods into one place. It’s located at Row NYC which was actually one of the places I looked at staying. It’s just as well I didn’t end up there because I’d have eaten too much! It’s a good place to go if you’re in a group of people who like different kinds of foods. We both ordered from Gabriela’s Taqueria in the end. Billy had chicken with Mexican rice and beans and I had a vegetable taco (and I ate Billy’s beans). It was very tasty if a little spicy for my mild tastes. It was good to find something vegetarian though and it was good to get some vegetables in my system! Other vendors included Luke’s Lobster and Ilili Box which is mediterranean inspired. My favourite part of my meal was dessert which brings us on to… 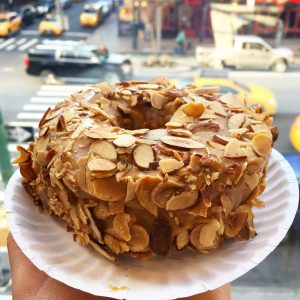 Dough is another one I’ve followed on Instagram for ages and was a must on our trip. I looked up directions on my phone to the nearest one and I was expecting it to be one of their shops but it turned out it was a stand in City Kitchen. It turned out well because there was a lot of choice so I had time to decide over lunch.

I was initially trying to choose between a lemon poppy seed, toasted coconut and cheesecake but then I went round the other side and saw the dulce de leche one with almonds on top. It was really good and not overly sweet either. Billy had a Nutella filled one which was full to the brim! 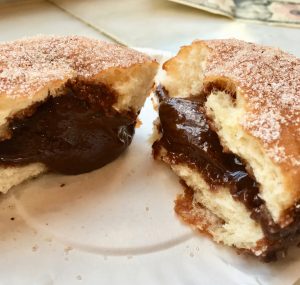 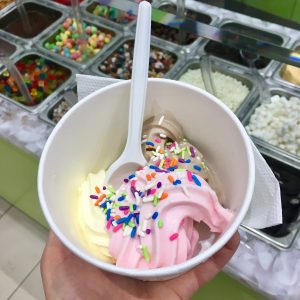 We were doing a bit of gift shopping around Times Square before a matinee and I saw someone with a big pot of frozen yoghurt so we went to find where to get some ourselves. FYI it was a warm day for November so don’t judge me. The frozen yoghurt was a bit like pick’n’mix – you grab a cup and fill it up with whatever flavours and toppings you want. We were just about to see a show so I tried to limit myself buy going for a little strawberry, cookie dough and cake batter with a few sprinkles for good measure. They also do waffles, crepes and smoothies. The chocolate fudge waffle looked delish but was a bit harder to eat on the way to the theatre! 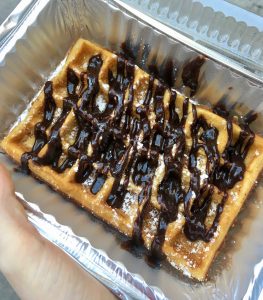 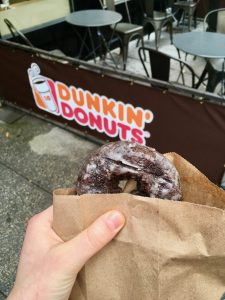 There’s a story behind this one. The first time I went to New York I was 10 and we were stopping off for a few days on our way to Florida. On the first day I wanted to go to Dunkin’ Donuts for breakfast but my little sister wanted to go to McDonalds. It was agreed that we’d do McDonalds that day and Dunkin’ Donuts the next so on we went with our day on a bus tour. Unfortunately there was a massive blackout later that day which meant everything closed. No New York skyline, no boat tours, no lifts up to the observatories but the thing that 10 year old me was most distraught about was no Dunkin’ Donuts. So finally, 14 years later, I got my donut. I had a chocolate glazed one and it was surprisingly very nice. It’s pretty cheap there so I thought they’d be a bit naff but it was moist and sweet and chocolatey.

I went to New York 10 years ago and had some fantastic food then. I’d love to go back and try some of these places!