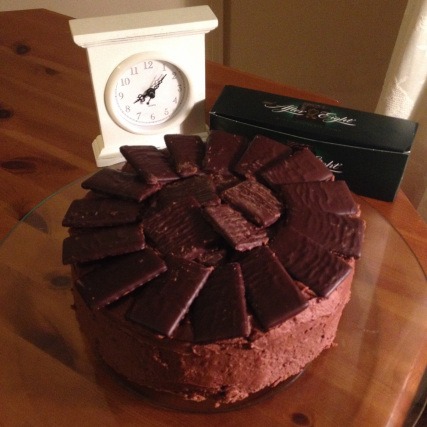 Chocolate and mint cake decorated with After Eights

One of the first posts I ever did was a recipe for a Jaffa Cake-Cake for my boyfriend’s birthday. Well it’s that time of year again so I decided to bake one of Billy’s favourites, an After Eight Cake. It has chocolate sponge, mint green icing between the layers and coated in dark chocolate icing.

Unfortunately, someone forgot to put baking powder in so I don’t know if it’s supposed to turn out like this. It had a crispy top but when I took it out after 30 minutes to check if it was cooked, it was still gooey inside. Keep checking it and when you can stick a knife or skewer in the centre and it comes out clean, it’s ready.

As I was adapting a plain chocolate cake recipe I was unsure how much mint extract to put in. I don’t actually like mint so I didn’t know if I had put enough in. The general consensus was that there was just the right amount of mint.

Heat the oven to 180ºc. Melt the butter and chocolate in a bain marie. Once melted, remove and leave to cool. Whisk the eggs and mint extract in a bowl until frothy.

Add the sugar and whisk until thick and mousse like. Whilst whisking, add the melted butter and chocolate.

Sift in the flour, baking powder and salt. Fold with a wooden spoon or plastic spatula. As you can see in the photo, this creates quite a thick mixture. Divide between 2 greased tins and bake for 30-35 minutes then leave to cool.

Melt the chocolate for the icing and leave to cool slightly. Mix together half of the icing sugar and half the butter in a bowl and add the mint extract and enough food colouring to make a minty colour. Sandwich the two layers together with the green mint icing.