We went to Newport recently and were on the lookout for vegan friendly restaurants. We found a great website called Eat Out Vegan that covers the whole of Wales and you can search by region, postcode or town and we found this really helpful. We eventually settled on Tiny Rebel Newport Centre because it was an independent restaurant that we wouldn’t get to go to anywhere else.

We did try to book on the Tiny Rebel Newport website but it seems that you can only book for a group of more than six. This wasn’t a problem because it was in the city centre so we figured if it was super busy we could find somewhere else to go close by. We needn’t have worried as it was fairly quiet upstairs and there were more seats downstairs too. I already had two options from the menu. My first was concocted from the sides menu and was falafel balls and house fries but I decided that since I had falafel at home I’d have a veggie pizza with vegan cheese, butternut squash, courgette and peppers. Billy also had a pizza and opted for pepperoni. You could also have the veggie pizza with vegetarian mozzarella if you were not vegan.

From where I was sitting I could see the chef in the kitchen through a big glass wall behind the bar. I really liked the look of the place with it’s exposed brick and almost bare lights. When you went downstairs you could see through another glass wall to the kegs are kept and beer is pumped up to the bar. They also had really nice toilets if that’s something you’re into. 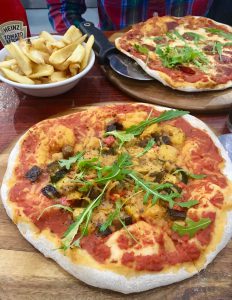 Tiny Rebel itself is an award winning brewery so there are loads of drinks options from Mango wit and Banoffee Dunkelweiss to Peaches and Cream or Cereal Killer IPA.

Our pizzas arrives with a side of fries to share. I loved my pizza and the butternut squash especially added something to it. It did have vegan cheese on but as you may know, I’m not the biggest fan as I just don’t think it tastes or acts like cheese. This is where the butternut squash came in. It was sort of pureed and acted as a bit of  topping like cheese would. It added extra flavour and stopped the pizza tasting too ‘vegan cheesey’ (go try some vegan cheese if you don’t know what I mean and if you have a recommendation for a  good one – get in touch!).

As much as I loved the pizza, the fries were my favourite part of the meal. They were so crispy and were sort of semi circular shaped so that there was optimum surface area for crispiness.

We both really enjoyed our meals and would recommend it fully. They also have burgers, pasta, salad snacks and sides and they vegan specials. They have more vegan options at their Cardiff bar and there’s also a bar at their brewery a bit further out of Newport.

If you’re in Cheshire make sure to check out my review of the vegan pizza at Firenze, Nantwich.