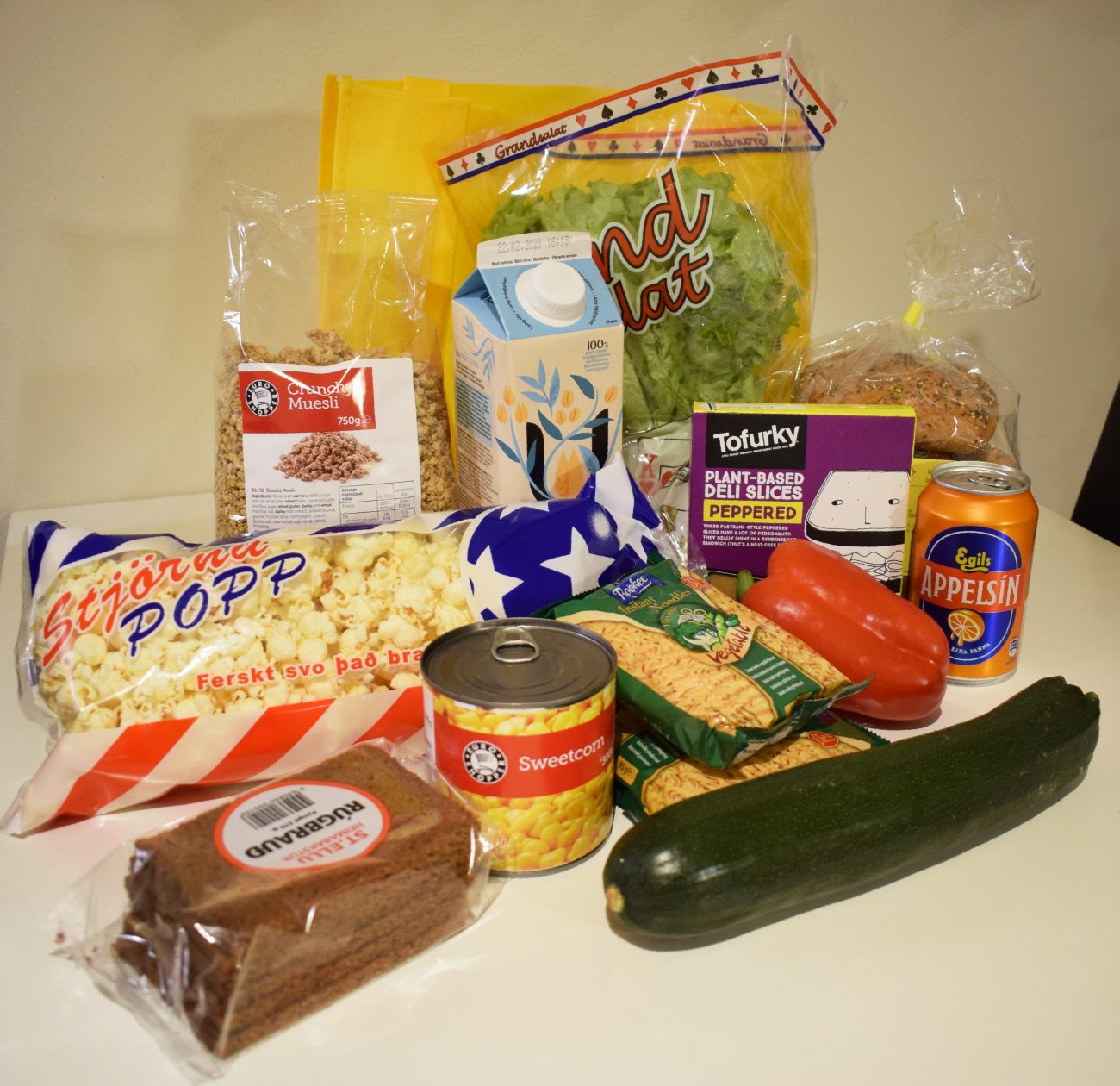 On our recent visit to Iceland we stayed in a few different places including a cabin in the middle of nowhere. I had a list of restaurants and cafes in Keflavík and Reykjavík where I knew I could get great vegan food but meal times in the middle of nowhere required a bit more planning. As the sun set around 4.30pm and we were in an unfamiliar place where they drive on the other side of the road and where they have unpredictable weather we were cautious of travelling too far for dinner. Instead we decided to go grocery shopping for some meals. Grocery shopping for some of your meals in Iceland is also a great way to save some money in a country renowned for its cost. In two out of three places we stayed we had a kitchenette where we able to prepare easy meals and store our food safely in the fridge. This meant we were able to make breakfast and a sandwich for lunch if we wanted.

As soon as we checked into our apartment and put our bags down we went to Bónus the supermarket which was about 5 minutes walk away from where we were staying. It’s important to check the opening times before you head out as they may not be open for as long as you might think. We bought some bread rolls (359 kr) for lunches as I wanted something we could take with us incase I couldn’t find somewhere to eat with vegan options while we were out for the day. A quick tip for finding vegan foods is that Milk is Mjólk and Egg is…well it’s Egg, and allergens are labelled in bold like they are in the UK and many other places. We also found some Ryebread (219 kr) so we got that to try (it tastes like the milk from a born of Frosties).

For breakfasts we bought oat milk (239 kr) and plain Muesli (329 kr) which was really tasty and started our adventurous days right. I was surprised because by the oat milk and other plant milks there was also Skyr made from oats and also oat based sandwich spreads too.

Rather than having fridges they have a whole cold room that you go into and get your meats, cheeses and milks. Another lovely surprise was that at the end of an aisle in the cold room there was a few shelves of vegan and meat free products. They had many flavours of Tofurkey slices so we bought some to go in the sandwiches. There was also plant based spread, mozzarella and even a lasagne ready meal! The Tofurkey was reasonably prices at 498 kr. and with 15 slices in a pack it was probably much cheaper than the real meat. We knew there were two nights that we would probably have to cook. I came prepared and packed a few packets of our favourite savoury rice (check what you can bring with you from your country) so I knew if I couldn’t find anything in Iceland at least I’d have some savoury rice! We bought a couple of packets of vegetable noodles from Bonus which were only 39 kr each and a pepper (73kr), a courgette massive (115 kr) and a tin of sweet corn (98 kr) to go in the rice and noodles plus we added in some Tofurkey too. Oh, and a lettuce for 245 kr to go on the side and in sandwiches. Lastly on this trip to the shops we bought a can of Applesín (79 kr) because I heard you must try this Icelandic drink (it tasted like Berocca and I loved it) and a bag of popcorn because I follow Jeannie from Iceland With A View and she always says how good this popcorn is and we obviously needed a snack for searching for the Northern Lights. This was our main grocery shop in Iceland and it cost us 2646 kr. which at the exact time was £16.50. Another quick thing to mention is that we stayed for 4 nights and we used card for everything We didn’t touch cash once, not for car parking, not for shops and restaurants and not for entering any national parks or tourist places.

We did have to get a top up of oat milk from a Krónan and we also bought some paprika crisps because we ate the popcorn in once night and needed snacks. If you’ve made it this far you deserve my bonus tip – Saturdays in Iceland are ‘Sweet day’ where all sweets from pick’n’mix self serve sections are half price. This is everywhere in Iceland! We stopped at a Bónus on the way back to the airport to buy some fruit and there was a shop called Hagkaup next door. I spotted the pick’n’mix right away and got stuck in. It is still expensive (just like it is in the UK) but if you want to try any Icelandic sweets it’s a great way to do it. We filled up with different liquorice and then decided we definitely hate liquorice. I used google to translate the ingredients so I knew they were vegan but it did take a while.

If you enjoyed this vegan Iceland post you might also want to read my reviews of Gló and Veganæs which are vegan restaurants in Reykjavík.