Los Angeles was our last and my favourite stop on our holiday. We’d already been to Michigan to visit family, San Francisco and Yosemite. I was really looking forward to all the vegan food in LA because I thought there would be loads since veganism is considered healthy and all that (not if you know how to make yummy vegan cakes though!). There were some places where there were lots of vegan options and some where they didn’t even know if anything was vegan so it’s a good idea to have a few places you know you can go to before you go. Here’s all the vegan food I had listed in my vegan Los Angeles guide.

We got to Los Angeles from Yosemite my bus, train and then another bus which took over eight hours overall. When we got to Union Station we just wanted something quick and easy so we grabbed a subway. I just had all the salad in mine except jalapeños and it was actually really nice. I think it might have had something to do with the fact that there was actual vegetables in it which I hadn’t seen much of so far in the holiday! 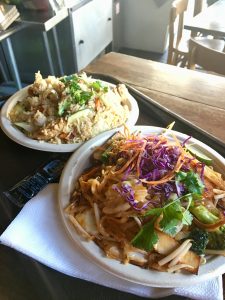 The next day we decided to go to Santa Monica Beach and have a chilled out day. I already had a place on my places to eat list that was in Santa Monica and its lucky I did because we would never have found it otherwise. Thai vegan is set back a little from the beach but we did eventually find it thanks to google maps! You can take out or eat in and if I lived there (in my dreams) I’d be getting takeout all the time! Anything that you can get at a regular Thai restaurant you can get here in vegan form. It was a no brainier for me to order Pad Thai because I love it and Billy had vegetable tofu fried rice. When the food came I couldn’t believe how much there was! My Pad Thai could have easily fed two people although one Hannah managed to eat it all. It was really cheap too at around $8 per main. 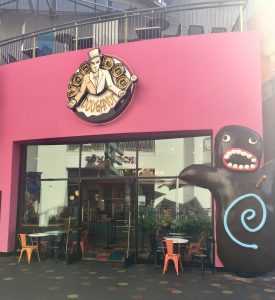 Day two in LA was my favourite of the whole holiday. We went on the Warner Brothers tour which was amazing and then we went to Universal CityWalk which is part of Universal Studios that anyone can go to. There’s shops and restaurants so I thought it would be a good place to get food. How wrong I was. I couldn’t see any food that I could eat. I think the only thing I found was a mushroom burger and we all know how I feel about mushrooms. We went up the stairs and there was a courtyard with a few different chain restaurants. Billy had a Pinky’s hot dog but there was a Taco Bell, kfc, Pizza Hut etc. and I’m pretty sure that you can ‘veganise’ a Crunchwrap or something at Taco Bell but we asked the man in there and he didn’t have a clue so I didn’t risk it. I ended up with cold fries and after that I felt sick every time I ate something so that’s fun. There was a doughnut shop there called VooDoo Doughnuts that had some vegan options so I was really excited to try one of them. I had the ODB which had Oreos and peanut butter on top and it was really tasty. Someone even stopped me when we were outside to say it was their favourite one so it must be pretty popular! The only negative thing was that you have to pay extra for the vegan versions. I can’t remember how much more but it was about 25c and I know that vegan versions often cost more to make but I make vegan cakes and I swallow the small price difference. It wasn’t the price that I disagreed with but the principle but hey, I still bought one and really enjoyed it. 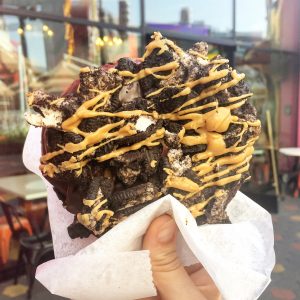 The next day we went to downtown LA so we obviously had to go to Grand Central market. I had heard of EggSlut before I went vegan and I knew Billy would love it. We were there at about 11.15 and the queue was already massive so I can’t image what it would be like at peak breakfast and lunch time! I had a ‘red’ falafel sandwich from Madcapra which had tomato, cabbage, pickle, tahini and basil. They were really friendly and helpful and let me know that although the red option was the vegan sandwich, they could make any of them vegan. We had tickets to see Beautiful the Carol King Musical at the Pantages Theatre later that evening so I had planned to get an early dinner at Cruzer Pizza and walk along Hollywood Boulevard and see the stars on the way to the theatre. We were still full after our lunch but I was so desperate to go to the all vegan pizza place that we went anyway! We shared a 12in pizza which was the smallest but was plenty for two! We were a bit overwhelmed with the options but we were recommended a vegan vegetable as you can pick 6 toppings. It was so delicious and another place I’d definitely go back to if I were in LA again. The staff were so friendly too! 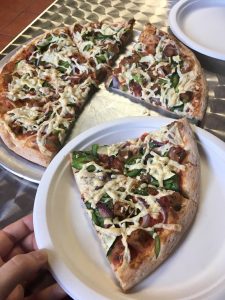 The next day we spent at Venice Beach. We had no plans for food but we came across Planet Hummus right next to ‘The Wee Chippy’. Billy wanted to see if the fish and chips were ‘real’ fish and chips (they weren’t) and I wanted to try the avocado hummus because that’s two of my favourite things. I had a box with hummus and warm pitta and it was so tasty although I think they gave me plain hummus rather than avocado. On our last day we decided to get tickets to go to Universal Studios. I was not very optimistic about the food options for me because of my experience at the CityWalk but I did find a cous cous salad which was really weird because it was curry flavoured but had blackberries and blueberries in. I mean, it filled a hole so there is that. You can’t take your own food in to Universal Studios so being vegan is a slight problem.

We flew home the next day and I was sure there would be vegan food at the airport. I wanted something like a sandwich to tide me over until our second flight where we got food. Unfortunately it was a choice between a salad or a burger so obviously I went for the burger. It was a southwest vegan burger from Point The Way Cafe which had a barley and risotto patty. It was one of nicest vegan burgers I’ve had and it came with fries which is always a bonus! It was such a big portion than even I couldn’t finish it despite the fact that I really wanted to eat all the burger! 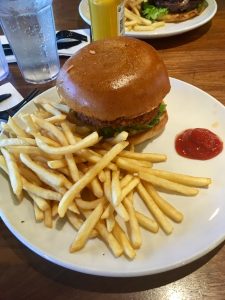 So the message from the past three blog posts is that if you want to have nice vegan food then you need to plan ahead (which is something we already know). There’s loads of tasty food to be found if you know the right places to look. If you plan carefully there are also lots of places that everyone can enjoy.