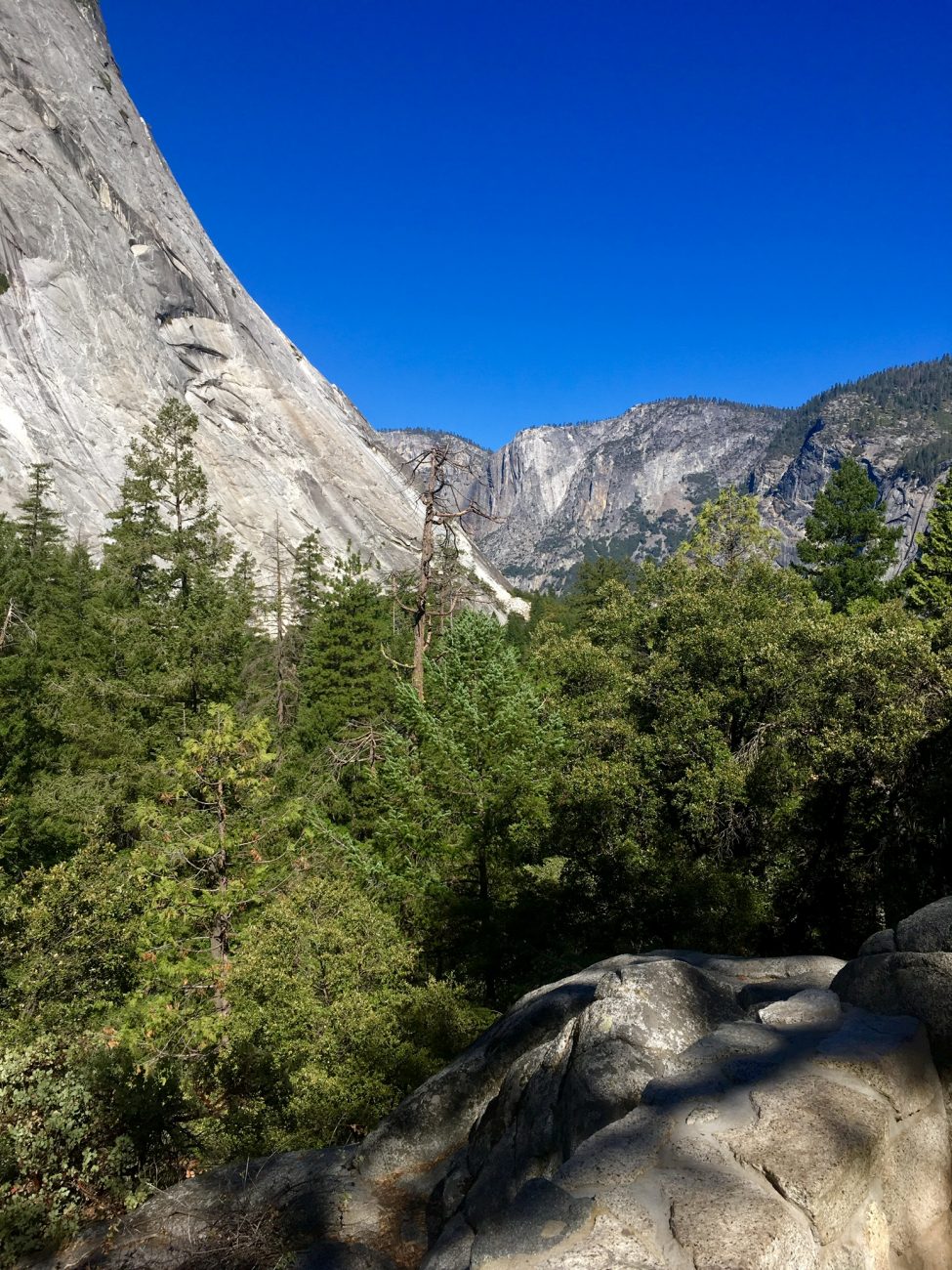 It’s been five whole weeks since we set off on our holiday of a lifetime and I’ll be honest, I still haven’t come to terms with the fact that it’s over! If you haven’t read my vegan guide to San Francisco yet you’ll want to catch up with that before reading this. After visiting family in Michigan and seeing the sights in San Francisco we got up super early and got a train and a coach to Yosemite valley. I wasn’t expecting much in the way of vegan food but as you’ll see in this vegan Yosemite guide, it threw up a few surprises!

We managed to get an earlier coach into Yosemite so we got there way too early to check in which gave us an opportunity to look around. We’ve all seen the stunning photos of Yosemite but it’s not until you’re there that you realise how commercialised it is. I described it as ‘Zoo Tycoon Yosemite edition’. I’m not saying this is a bad thing – You need the toilet? There’s one within walking distance. Need to fill your water bottle up? Drinking fountains are everywhere. Want to bake a cake while you’re there? The themed ‘village’ shop has cake mix (I mean, even I didn’t feel the need to bake a cake there and I’m the cake fairy). 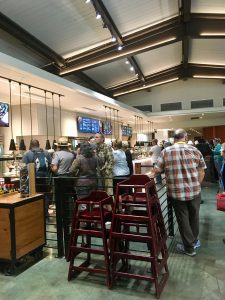 We stayed in Yosemite lodge which had its own complex with a gift shop, bar, restaurant, counter food service canteen and even a Starbucks. I was expecting to live off the snacks I brought with me from Target for the two days we were there but we thought we’d check the menus just in case. We checked the restaurant ‘ The Mountain Room’ first and the only vegetarian thing they had was a mushroom burger. I could have asked for it without cheese but I really hate mushrooms so it was a no from me. Mentally resigning myself to my snacks we checked next door at the Base Camp Eatery. There were three counters each with a different food. One with pizza, one with burgers and one where you could pick a main and two sides (there was an American option or a world flavours option). Something caught my eye on the burger menu. Does that say beyond burger? Are beyond burgers in America the same as the ones in England? Turns out Beyond Burgers are actually based in California and they were on the menu! I was so excited that there was something I could eat and I had never tried a beyond burger before so I got to try something new! 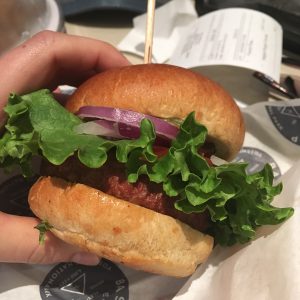 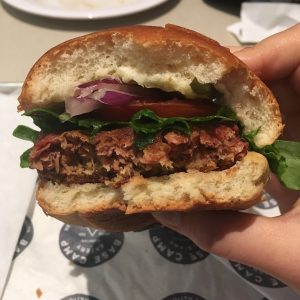 It’s safe to say that the first night I had that burger. I think it might have been my favourite burger of the whole trip because it wasn’t loaded with other toppings (which makes me think they’re covering up the taste of something nasty in the actual burger). We also took the free shuttle (which takes you to all the main trailheads, accommodation and amenities in the valley) to the valley shop to get some snacks. There wasn’t much in the way of vegan food here except the usual crisps, popcorn and fruit although they did have a big selection of dried fruit. We got some dried kiwi just because we’d never seen it before. 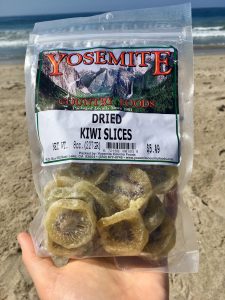 The next day we went on a ‘moderate’ walk (I thought I was going to die) and after, spurred on by my vegan finds the previous day we went to Half Dome Village to check out their restaurant and shops. I was so disappointed that there wasn’t anything for me. We got the shuttle back to Yosemite Lodge to get food there. I had a massive vegan hummus wrap which was very tasty despite the weird cucumber that I’m convinced was a green tomato (it said it was a cucumber on the packaging). There was also a pb&j sandwich I could have had from the canteen in the village. Billy had a pizza for lunch and then made it his mission to eat a pizza from every stop on our holiday. 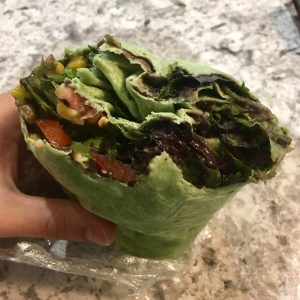 We walked to Yosemite falls which weren’t actually falling… yes I managed to book to visit Yosemite when most of the water had dried up, there was no mirror lake either but I bet it all looks fab in spring. Oops.

We did a bit of packing and I started watching ghostbusters but I think Base Camp Eatery closes at 8pm so we went to get food. I had raved about the burger so much that Billy had one and I had some food from the world foods counter. The American options were basically a choice of meat and then sides like potatoes and roast veg. The other option was noodles or rice with sides. I had vegetable stir fry and ‘eggplant’ stir fry. The only other side I can remember was beef and broccoli stir fry. The eggplant stir fry had tofu in and although I don’t usually like tofu, I think it was my favourite food from the whole holiday. I did have to wait a little for them to make it for me but it was totally worth the wait. It was a massive portion too! I’ve since tried to recreate it at home and its pretty good (although not the same). There might not have been many options for vegans in the park but considering I was expecting to live off Chex mix and crisps the whole time I was pleasantly surprised. I think if I went back again even in just a year there would be more options. 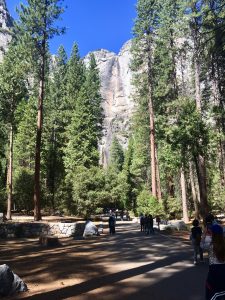