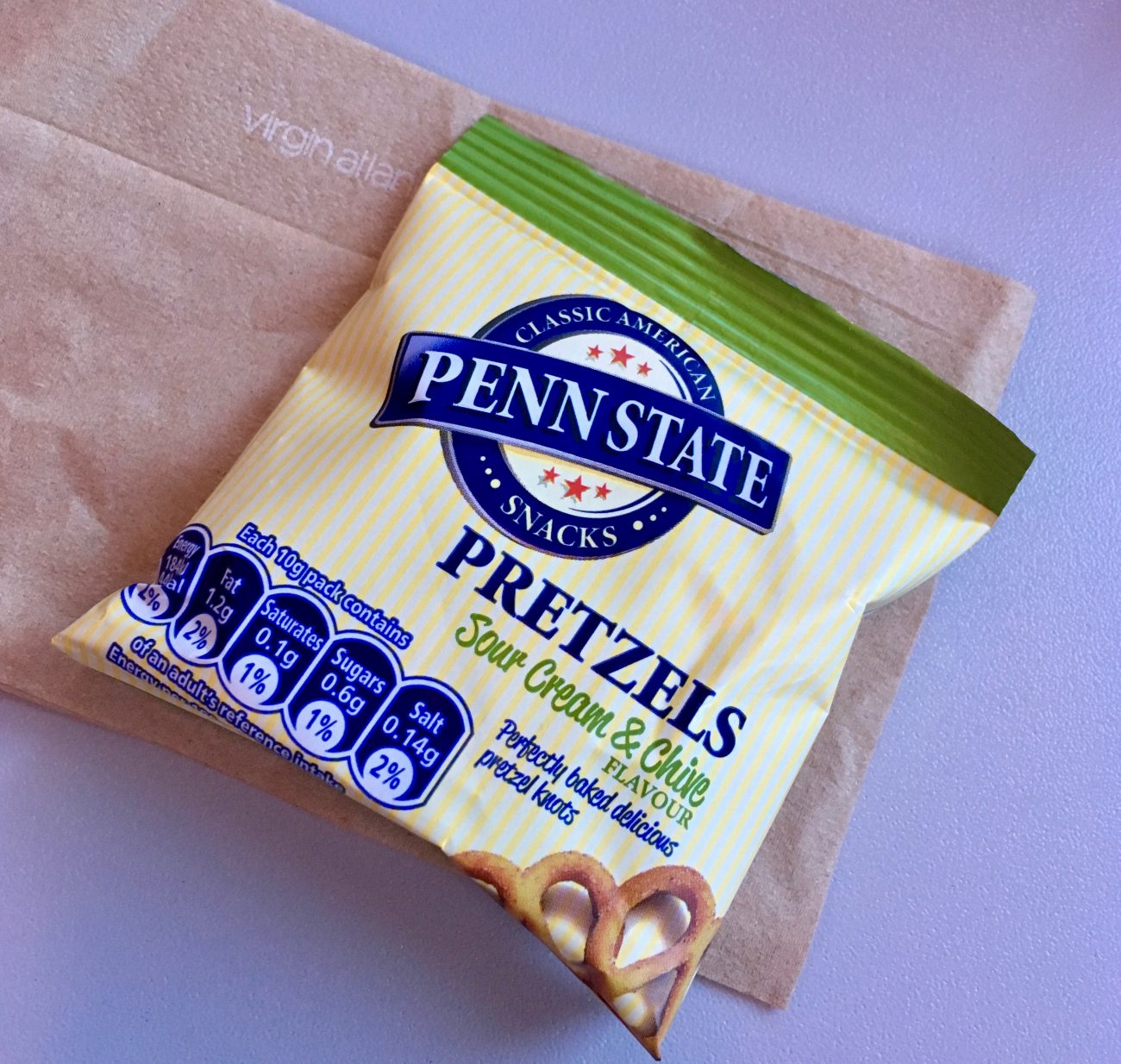 I love planes but I was feeling anxious about flying to New York for two reasons.  One was using the toilet because no one wants to wee at 38,000ft and two was when will they bring me my food? What if I get hungry?

Luckily we flew with Virgin Atlantic who kept us topped up with food throughout the flight. We were in economy and I pre-ordered a free vegetarian meal. I was going to get vegan but I thought if everyone else gets chocolate and I don’t I’ll be too jealous for words. There’s lots of special meals to choose from on the virgin atlantic food section of your booking including diabetic and gluten free and when you order a special meal it gets brought out first (which I was real excited for).

When we had taken off and the seatbelt signs were off they started to bring round a snack and drinks. The snack was a little bag of sour cream and chive pretzels which were good but made the plane smell for a bit. I just had water because I was trying really hard not to get dehydrated but you could have juice, soft drinks or alcohol. 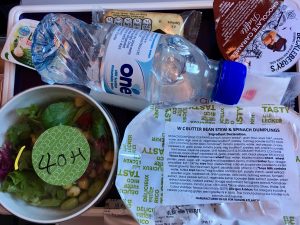 Not too long after that they bought round a menu that said your dinner options and what we’d be eating later. I can’t remember what the vegetarian option was on the menu because the meal I was given was not the same. I had a butterbean stew with spinach dumplings, potato and broccoli. For plane food it was pretty nice although the butterbean stew itself was too spicy. It was a bit of a shock the first bite I took! It came with a bean salad, a couple of crackers and spreadable cheese. For pudding there was a chocolate caramel truffle pot. The people with ‘normal’ meals had a GU lemon cheesecake pot so I was pretty pleased with my chocolate! After dinner we had tea and coffee.

An hour and a half before we landed we had ‘afternoon tea‘. Now I’d actually been to a proper afternoon tea the day before and compared to that it was not anything like afternoon tea. I hope any Americans flying back to the US didn’t think that’s what afternoon tea really is because they’re gonna think it’s rubbish. It was more like a packed lunch which is fine because that’s what I was expecting anyway. We had cheese and tomato chutney sandwiches on malted bread, sea salted crisps, a nougat bar and some mints. I swapped my crisps and mints with Billy’s sandwich because he doesn’t like cheese. It was tasty and the bread was especially nice but I was full for pretty much the rest of the day. The nutty nought bar was alright but I’d probably have preferred something a bit more ‘normal’ like a small chocolate bar or a biscuit. 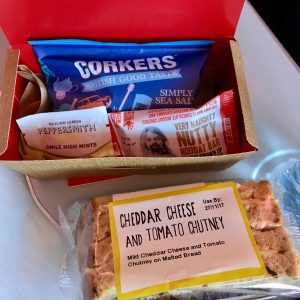 When I came back to the UK from New York the last time I’d been there I fell asleep before dinner and was really disappointed when I woke up and found out I’d missed it! I was determined to stay awake this time and even though I was very tired I managed it. We had the pretzels as a snack again and then we had dinner. I didn’t feel as awkward this time because there were two more vegetarians around me so it wasn’t like I was eating all alone. Unfortunately dinner was mushroom farfalle bake and I hate mushrooms. The fact that mushrooms would probably be involved in a vegetarian meal was something I considered when I pre-ordered but I took the risk. I ate the pasta as it was just a bit peppery but left all the mushy mushrooms. Luckily it came with crackers and two types of cheese. One was a creamy softer cheese and the other was a sharp cheddar (which was delicious and I ate Billy’s too). For pudding was a red velvet cake pot which was cute but not as good as my chocolate pot not the first plane. 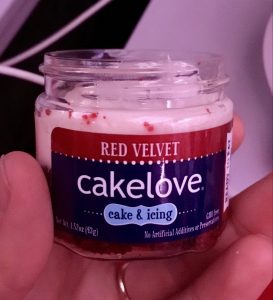 After a couple of hours of sleep it was breakfast time. We had blueberry yoghurt, a little bag of granola to sprinkle over and a pot of melon. I loved the breakfast but Billy only liked the granola so I ended up eating most of his too (I decided this was okay because it was mainly fruit and I hadn’t eaten all of my dinner anyway). The blueberry yoghurt was really, really nice but that might be because I haven’t eaten yoghurt for a long time.

Overall, for plane food the virgin atlantic food was all good. The only thing I didn’t like was the mushroom pasta and I could have done with a little less spice in my butterbean stew. However if you don’t like something there’s always plenty of other stuff on your tray to keep you going. My favourite meal was probably the breakfast, seconded by the ‘afternoon tea’ because they both felt much fresher which is great on a long flight. If you have a special diet I’d definitely recommend pre-ordering to make sure you don’t miss out but whatever your diet, there will be some virgin atlantic food that you like.

As far as plane food goes I think Virgin are up there with the best. BA are shocking, on my flight back from Dubai recently they ended up giving me a kids meal because they served a vegetable curry that was quite possibly the most repulsive thing I’ve ever tried to eat. Emirates are usually good too x

I’m flying Air Canada later in the year so I will see what their veggie options are like too!

That red velvet cake pot looks great for flight food! I haven’t had aeroplane food for ages but this looks ok.

I haven’t actually had an aeroplane meal since going Vegan! I did travel to Portugal last year and the only vegan thing I could order was a packet of crisps!! Glad they were able to accommodate you!