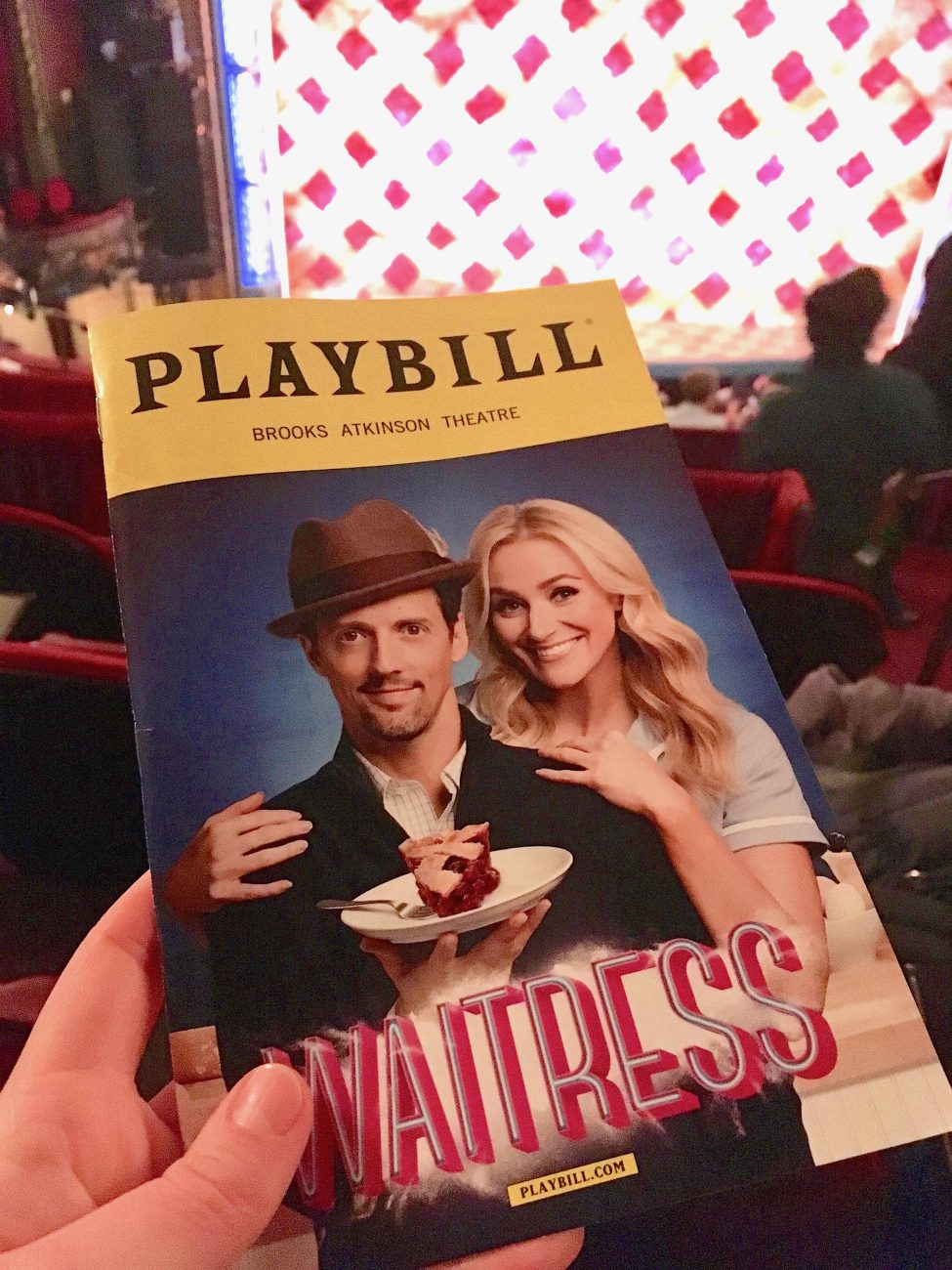 This post is on a bit of a tangent to what I normally write about but stick with me. My very first blog was actually about theatre (you can take a look here if you fancy a laugh) so a musical that involves pies is pretty apt.

I’ve been pretty obsessed with the soundtrack for Waitress for a while so when we were planning to go to New York it was the one Broadway show that I had to see. Based on the film and with music by Sara Bareilles, the show follows Jenna who is a pie maker and waitress in a diner. She finds out she is pregnant and thinks there is no hope of escaping her loveless marriage so she dreams of winning a pie contest to make a better life for herself and the baby.

Stacy Donnelly is their pie consultant (dream job?!) and along with her team of eight bakers provides 32 real on stage pies a week and 1,400 mini pie jars which are sold by the ushers. As you walk into the theatre you can smell pie thanks to a highly spiced apple pie baking slowly in a concealed oven in the corner. The pies all have creative names like ‘Deep Shit Dish Blueberry Bacon’ and ‘My Husband is a Jerk Chicken Pie’ and are all dreamed up by Jenna according to the situations she’s in. Jenna was played by Betsy Wolfe and Dr. Pomatter (the new gynaecologist in town) was played by Jason Mraz in his Broadway debut. They were both funny and I really warmed to their portrayal of their characters. I didn’t think I’d like Jason Mraz but I was so wrong about him and Betsy Wolfe played Jenna differently to how I imagined but it made so much sense. Now I can’t imagine Jenna any other way. The band are on stage and I loved how they were part of the diner. The songs were amazing and the highlights for me were ‘Opening Up’ with the whole cast, ‘Never Getting Rid of Me’ in which Christopher Fitzgerald was hilarious and ‘She Used To Be Mine’ which is a favourite of mine anyway but seeing it sung live with all the emotion was something else. I also loved the friendship and trust shown between Jenna, Dawn and Becky in ‘A Soft Place To Land’.

There’s even a Waitress Pie Book

with loads of recipes from the show. I’ll definitely be getting this and trying all the recipes! My favourite sounding one so far is ‘I can’t have an affair because it’s wrong (and I don’t want Earl to kill me) marbled chocolate cheesecake pie’. It’s in there. Really.

It even inspired me to make my own pie when I got back to the UK. I created this Jet Lag Pie late at night. It has white chocolate ganache for a sugar rush and raspberries with seeds left in because when you’re jet lagged you don’t want to be sieving your raspberry seeds out. Who knows, you might see the recipe on here soon. I love seeing musicals and this one sound fun – I love the fact that they are baking pies in the corner of the theatre so you get the lovely pie aromas as you are watching the show!

One of my favourites! Vegan brownies 😍 I’ll b

So excited that I will be doing @alderford_lake Su

Red velvet with gold for a customer who had their